The “President’s Choice Award” from the St. Louis Sports Hall of Fame is given annually to a person or company who has made significant contributions to the St. Louis sports community. 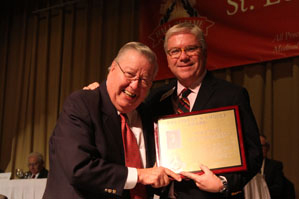 From the St. Louis Sports Hall of Fame website:

“Thomas J. O’Toole Jr., is in his fifth year as a member of the USGA Executive Committee and his second as vice president, having served as secretary in 2010.O’Toole is a member in the law firm of Mickes Goldman O’Toole, LLC. He chairs the firm’s Business and Corporate Group, while his practice focuses on real estate, specializing in zoning/land use, condemnation and real estate transactions. He earned both his undergraduate degree (1979) and law degree (1985) from St. Louis University.

A native of St. Louis, O’Toole has been involved with the USGA since 1988.

After progressing and serving the USGA as a rules authority and serving on numerous committees, O’Toole was named to the 15-member USGA executive committee. He became the first St. Louisan in nearly 40 years to serve on the prestigious board. Hard Hordin, who later became president of the USGA and was chairman of Augusta National Golf Club, was the last.

In 1992, he founded the Metropolitan Amateur Golf Association, a regional association that serves eastern Missouri and central Illinois. He serves on the executive board of the association.

O’Toole chairs the Championship and Compensation committees and also serves on the Commercial, Equipment Standards, Handicap, Management, Rules of Golf and Joint Rules of Golf committees.

The move of O’Toole to the USGA’s inner circle solidifies the reputation he has built in St. Louis. Players and others know that some of the best amateur golf is played in St. Louis and tournaments are conducted in a professional manner. Since 1996, eight USGA championships have been held in St. Louis.”